My research areas are psycho- and neurolinguistics. In particular, I am investigating syntactic, morphological, and phonological processes in language production and reading aloud. Furthermore, I am interested in articulatory-motor processes during speech production, language processing in neurologically impaired patients, and forensic phonetics.

The science of speaking

Niels Schiller has been professor of psycho/neurolinguistics and a member of the management board of the new Leiden Institute for Brain and Cognition (LIBC) since 1 July 2006. His specialist field is language production:  what happens in the brain when we speak?

If mere mortals didn't have the tendency to make a slip of the tongue now and then, the work of psycho- and neurolinguists would be much more difficult.  Niels Schiller, appointed on the 1st of July as Professor of psycho/neurolinguistics, is conducting research into what happens in the brain when we speak. 'The fact that people might mistakenly say 'heft lemisphere' instead of 'left hemisphere', teaches us that we do not produce words as holistic entities. They are formed anew each time, phoneme by phoneme.'

However, further research into this area reveals the extent of its complexities, and many subdivisions within the subject. In psycho- and neurolinguistics, a distinction is made between language acquisition, language perception and language production.  This latter is Schiller's specialist area. Within this field he has further specialised in research into the production of sounds, phonological encoding. ‘We already know what we are going to say, but how do we get the sounds, how do we put them in the right order, how does the stress get put in the right place?  What cerebral processes are needed to achieve this?’

Niels Schiller is a professor within the Faculty of Arts, but he also has an office within Social and Behavioural Sciences.  He can also frequently be found at the LUMC.  This is where the MRI scanner is located, with which he will be conducting his experiments.  In addition, he is a Board Member of the LIBC, which means he's involved in many different areas.  His specialist field is broad and very interdisciplinary.

Schiller, German by birth, completed his studies in 1994 in Trier, his specialist subjects being computer linguistics, German studies and phonetics.   He completed his doctoral research at the renowned Max Planck Institute for Psycholinguistics in Nijmegen, under the supervision of Pim Levelt, the father of Dutch psycholinguistics.  Schiller: ‘When I started, I was more of a linguist than a psychologist.  Now it's the other way round.'

When he was awarded a Vici subsidy by NWO in 2003, Schiller's career really took off. He became Professor of psycholinguistics in Maastricht, and was invited to become a member of the prestigious KNAW Young Academy.  He was very happy in Maastricht and  didn't respond with immediate enthusiasm when Lisa Cheng, Professor of theoretical linguistics and co-founder of the Leiden Institute for Brain and Cognition, sounded him about about whether he would be interested in coming to Leiden.

‘First, think about what you can't do in Maastricht, which you might be able to do here,' Lisa Cheng advised artfully. Schiller thought hard about it, as did his wife, and having counted their future blessings, they decided to make the move. Schiller: ‘Leiden has a Faculty of Arts, for example, which Maastricht doesn't have.  And, more importantly, psycholinguistics in Maastricht was possibly going to be scaled down.  My group was growing, but I saw my specialist field becoming steadily less well represented in education.  And within two weeks my wife had a very interesting position as clinical psychologist. That was well before my appointment was finalised.’

His Vici project, on which some five researchers are working, is on monitoring pronunciation. Schiller: 'All speakers also listen to themselves. So you can correct yourself as soon as you hear what you have said. But sometimes we correct language mistakes even before we have spoken them.  Then it's our internal monitor at work. In the Vici project, we want to find out how you can separate this internal and external monitor, on the basis of underlying neurocognitive processes.'

As an example: 'One of my PhD researchers is carrying out experiments with conflict situations which you might come across if you are involved in language production. Sometimes there are several words available for the same concept. For example 'ship' and 'boat'. Sometimes ship and boat mean something completely different, but often they are synonyms. One person might always say 'ship' and another 'boat'. We divided our research subjects into two groups: those who always say 'boat' and those who always say 'ship'. We then divided these groups into a further two groups. In an MRI scanner we showed the candidates pictures of different vessels. One group was allowed to say what they would normally say, but the other was instructed to say 'boat' when they would normally say 'ship', and vice versa. We had expected some internal conflict with the last group since they were having to suppress something. Indeed, we demonstrated that the area of the brain which is responsible for cognitive control was more active in this group.'

And what will he actually be doing in Leiden? Schiller: I am taking my Vici project with me, and transferring this will take a great deal of time.  I am not under the illusion that I will be able to start up any new projects before next year.  But my current projects will, of course, continue.  And I will be lecturing, too.  For the time being only within the Faculty of Arts, but at some point in time I want to offer study blocks for both arts and psychology students.'

Schiller: ‘Another researcher, a postdoc, put candidates in an MRI scanner and asked them to name pictures while they were exposed to sound, so that they couldn't hear themselves speak. Here, too, we saw different areas of the brain being activated than when they could hear themselves talk. This is a first step to resolving the question of which structures are important for monitoring. I intended to apply this test to stutterers. One of the theories about people who stutter is that their internal monitoring system doesn't function properly.  Their brain keeps giving signals that they have said something wrong, which means that they keep on starting over again. I haven't got around to this yet, but I still intend to carry out these tests.'

This image shows the difference between naming pictures with and without verbal feedback.  The activity shows which areas of the brains have to work harder when there is no verbal feedback available.

Together with Claartje Levelt, another Leiden linguist, and Paula Fikkert from Nijmegen, Schiller has also carried out research into (linguistic) stress.  This system seems to be more complicated than was previously thought.  Schiller:  'In 90% of Dutch words, the stress is on the first syllable.  We thought: only the 10% of irregular words will be stored, the rest will be calculated using rules.  But that's not how it works.  Within the irregular words, we found, by paying attention to the reaction time, yet more words which were irregular.  We haven't yet reached any conclusions.  It may well be a combination of storing information Lexical stress.' 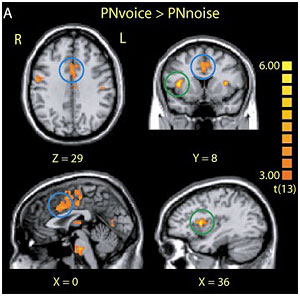 This image shows the difference between naming pictures with and without verbal feedback. The activity shows which areas of the brains have to work harder when there is no verbal feedback available.

After a postdoc in Harvard in cognitive neuropsychology, Schiller returned to Europe.  He also did clinical work in America, with aphasia patients.  ‘I learned an enormous amount there, but I found the scientific climate too hard.  I like to work hard, but what I experienced there, I realise it's not for me.' Schiller started in Maastricht as a KNAW researcher.  For the psycholinguistic area of his research he travelled a number of times each week to the Max Planck Institute.

As Schiller is conducting research within the LIBC, he can also carry out neurocognitive research.  Together with Lisa Cheng and Johan Frijns' group (LUMC), he will be carrying out research into deaf children for whom a cochlear implant which enables them to hear.  Cheng is also planning to set up a master's in Clinical Linguistics. ‘I will certainly be working on this, too.'

From experience Schiller knows that MRI research is time-consuming and problematic.  'I knew from the outset that my Vici project would be difficult.  But progress is slower than I expected.  fMRI and EEG are complicated methods.  One of my postdocs has only completed two fMRI studies in three years.  One of these has just been accepted, and by a very good journal (Human Brain Mapping), but still...  People often underestimate it.  You hear such comments as: Ýou put someone through a scanner and then you know what's going on.' But it doesn't work like that.  There are so many areas of the brain which are active that it needs a lot of analysis to understand what's going on.'

In future, Schiller wants to carry out research into the actual articulation of phonemes.  'The link between the transition from abstract plans to actual pronunciation is still missing.  Then you're dealing with the motor cortex.' This research, too, will be difficult, not in the least because in an MRI scanner the candidate has to lie completely still.  He shouldn't move his head even a millimetre. Schiller: ‘Our monitoring project, whereby candidates have to name pictures in a scanner, was one of the first indications that it is possible.'